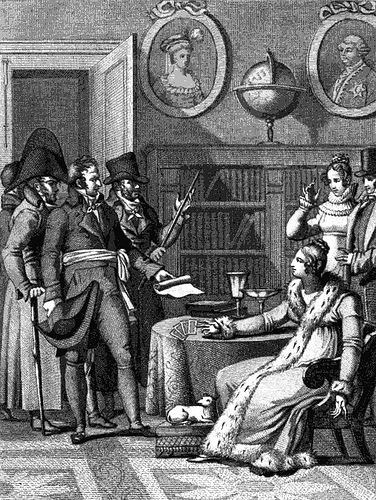 So much has already been written about Madame Lenormand that it is hard to add anything new on the subject. However, this site wouldn’t be complete without some information on the woman who inspired the Lenormand Oracle and generations of fortune readers all over the world.

Born in Alençon (France) on May 27, 1772, Marie Anne Adélaïde Lenormand was a very popular French fortune teller that lived during the late 18th and early 19th centuries. She is perhaps more well known by historians as one of Joséphine de Beauharnais’ advisors, who predicted that Joséphine would be raised higher than a queen, and that her husband (Napoléon Bonaparte, then an officer in the French army), even higher than a King.

Madame Lenormand left behind quite a few publications (mainly to promote herself or in answer to her detractors / critics so a lot of what she writes seems self-serving), but nothing of her occult collection actually survived. In fact, the lack of cards or written essays about her craft has some people (myself included) doubting that the oracle we use today is the actual system that she used.

First of all, all the accounts that we have left mention that she read with ordinary playing cards; that she was well versed in the Tarot as well as Astrology; and, that she had an assorted mix of divination tools on top of the cards and astrology… there are reports that she used a rooster, mirrors, eggs, tea leaves… whatever you could possibly think of, Madame Lenormand had done it at some point. She even commented that she had hundreds of ways of interpreting cards in one of her memoirs, but if one thing never left her side… those were her playing cards. They even accompanied her in prison..!

If there are any doubts about the oracles that bear her name, there is no doubt in any initiate’s mind that the techniques do work whether or not they are hers!! In fact, she was so successful that she even came under the scrutiny of the fledgling French Republic’s revolutionary leaders as well as the police (obviously, predicting their deaths did not help matters). She was of course imprisoned a few times, eventually being released, but the attention only helped fuel her popularity as a fortune teller.

Madame Lenormand lived through the French Revolution, Napoleon’s rise as well as his fall, lived off of her craft, and eventually, died of old age in her Paris residence on 25 June 1843. She was 71 years old.

Her nephew, inheriting her belongings, decided to destroy every vestige of her occult library. Gone are her astrological charts, her cards, her notes… nothing is left — that we know of — other than police records and the accounts that we have from some of her clients and friends. The publishers of the time, trying to capitalize on Madame Lenormand’s reputation and name, published the oracles that we know today and that bear her name, shortly after her death…