If you are a Tarot enthusiast, then you will be tempted to combine Lenormand with Tarot spreads… Don’t deny it! I know you will! (Yes, I am grinning mysteriously, and no… there’s nothing wrong in doing that, really). I’ve been there myself, and I have seen countless others do the same as well! What you might not realize, however, is that by combining Lenormand with Tarot methods, you aren’t using your Petit Lenormand to its maximum potential in doing so…

Don’t look so discouraged..! Not all is lost!! ‘Au contraire…’ you’re in a very unique position of blending your Tarot experience with your new Lenormand knowledge!! I’ve been reading the Tarot for almost 20 years now, and I’ve been practicing with the Lenormand oracle for roughly half that time. But in that time, I have used various techniques that have successfully incorporated both systems!

What follows is my advice to all of you Tarotmancers out there that do decide to throw yourselves into the deep end by blending the Tarot and the Petit Lenormand systems together!

The Tarot is from Mars!

(Yes, this is my spin on the ‘Men are From Mars, Women are from Venus’ book! Read on!!) 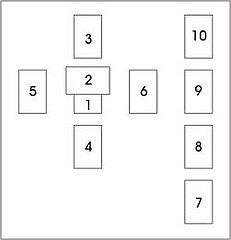 First of all, the Tarot system assigns a particular meaning to the card’s place in a spread. For example, in a Celtic Cross spread, if a card lands in a certain spot, it represents what people think of you. In another, it represents what you hope or fear, etc, etc.

You also have 78 cards to help you, so you have a wide range of interpretations since each Tarot card has its unique twist. You can make heavy use of symbolism on the card’s picture, its suit, and you can glean an extra layer of karmic principles with the Major Arcana.

As you know, there is plenty of food for thought with the Tarot!

The Petit Lenormand deck has 36 cards; less than half the cards you’d find in a Tarot deck!

Not only that, Lenormand isn’t even a complete deck of cards! Where the Tarot’s Minor Arcana could be considered a modified deck of playing cards (from deuces to aces), Lenormand is based on an abridged deck of playing cards (sixes to aces). Obviously, there is a lot less that a single card can possibly tell you!! Which is why the Lenormand method bases itself more on what a combination of cards might mean together, rather than what a single card by itself would tell you.

That’s important! Let me repeat it:

“The Lenormand bases itself on a combination of cards together, rather than what a single card will tell you!”

So, while using the Tarot would resemble shooting a billiard ball directly into a corner pocket, Lenormand would be more like rebounding the ball from the buffer and into the pocket. In this case, the buffer is another card that helps you add more meaning to your interpretation (actually, the more Lenormand cards that you bounce off each other, the better in my opinion).

Still with me? If not, the important thing to remember is that Lenormand needs you to pair up cards in order to give you a wider range of interpretations.

What most Tarotmancers are tempted to do is use something familiar like the Celtic Cross and use it to work with Lenormand, but as we’ve just discussed, a Lenormand card needs to be paired up with another card. What Tarotmancers are in fact doing by using the Lenormand cards in a Celtic Cross spread, is taking them away from their natural dynamic and potential… Using specific layouts with specific meanings aren’t the best way to use Lenormand. What you must use is a method that lets you make as many associations as you possibly can… something that most Tarot spreads don’t do.

Here are a few techniques that will get you started in using the Petit Lenormand Oracle for you to consider:

– Basic Guidelines for Reading with the Petit Lenormand Oracle covers String Readings which work really well combined with the Tarot.

At the same time, you should consider diving into the more advanced techniques, such as:

THAT SAID… combining Lenormand with Tarot is a powerful technique!

Let’s go ahead and try the techniques described above..! I’m sure you’ll be pleased with the results. Now here’s some information on how to bounce the Petit Lenormand Cards with Tarot Cards.

The following two cards is what I picked for a consultant of mine. They were meant to answer “who is the consultant” and were part of a larger spread of 5 cards.

From the house card, we obviously have a man. I got the vibe of a cozy family man who has mature children. He felt like the nurturing type who tended to all his children, and was perhaps older and wiser, with a lot of fatherly experiences under his belt. The moon card, however, laced the whole affair with fluctuating moods and uncertainty. This was a man who has seen how his past affects his present, and who is aware of how certain decisions he made long ago are still affecting him several years later. It also spoke about someone who’s going through a deep spiritual and psychic transformation.

As you can see, the Tarot brings in a new depth to the reading. Obviously, you might not want (or need) to use any Tarot cards with the more complex Lenormand spreads… but for smaller spreads (3-5 cards), adding the Tarot is such a charm!!

You might find yourself wondering if this is Tarot Lenormand style or Lenormand Tarot style?