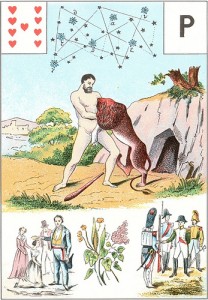 Out of all the Lenormand oracles, the Grand Jeu de Mlle Lenormand [Affiliate Link Disclosure] (AKA: the Astro Mythological Lenormand and the Grand Jeu Lenormand) is perhaps the most complicated and detailed oracle you will find on the market.

It is comprised of 54 cards (the jokers being replaced by a Man and Woman subject cards), and is filled with Greek Mythology, scenes that describe everyday situations, flowers, playing card suits, constellations, as well as alchemical annotations.

Out of all the oracles that bear Mlle Lenormand’s name, I think this deck is the closest in representing the one that she most likely would have created in the hopes of eventually publishing it herself.

Its complexity has an extravagance that only Mlle Lenormand might have attempted in order to make the Mother-of-all Divination tools. If anything, Mlle Lenormand didn’t just dream big; she dreamed big and large with neon sign, hoping to upstage anyone else at the time.

It is also, in my opinion, the reason why the deck isn’t as widespread as the others.

The deck is very complicated and cumbersome that will likely discourage most beginners. It is obviously meant for someone who has an extensive background in a variety of occult sciences, as well as an excellent grasp of Greek Mythology. It definitely caters to a very distinct clientele.

However, for those of you that want to follow in Mlle Lenormand’s footsteps, this oracle is probably the closest thing you will get that will en-globe most of her occult knowledge. It is well known that Mlle Lenormand loved Greek mythology, and that she studied extensively in astrology as well as alchemy. At one point, she even sold flowers or gave them away to some of her clients to counter or encourage certain influences.

Despite all of its complexities, the Grand Jeu Lenormand is the perfect way to expand your Lenormand knowledge as well as your intuition.

Learn how to read with the Grand Jeu Lenormand! See more details, here..!

Looking for Lenormand Decks or Books?