How to Read the Grand Jeu Lenormand

UPDATE (2021): The Grand Jeu is no longer in print, and therefor extremely hard to find at a reasonable price..!

Before you start, if you don’t have your own copy of the Grand Jeu yet, you can find a Grand Jeu de Mlle Lenormand with book for sale here. Given the Grand Jeu’s complexity, I also highly recommend you keep some notes! So, make sure you have your favorite diary or some pens and paper ready…!

Now, let’s get started on how to read the the Grand Jeu Lenormand!!

The first thing you need to know is that the Grand Jeu Lenormand is based on Greek mythology, and though there is a booklet on the Grand Jeu Lenormand that comes with the deck, it won’t help you delve deeper into the deck’s vast assortment of meanings. However, you can get around this by finding yourself some Greek Mythology books! The stories that we’re mainly interested in are The Argonauts (AKA: The Quest for the Golden Fleece) and The Trojan War, but there are other Myths included in the deck’s illustrations and a good reference book will really help you along.

“The Golden Fleece: And the Heroes Who Lived Before Achilles

Reading with the Grand Jeu Lenormand

In my opinion, the Grand Jeu Lenormand works better when it is laid out in a straight line. I highly suggest picking only 3 to 5 cards (I personally go with 5, which gives you a central card and two more on each side) since there is a vast amount of information to be gleaned. Below is a brief explanation on how to read the cards.

So, if you follow the example from above, you have the key card at the center. You interpret the middle card’s large drawing first, and then qualify it with the two smaller icons from the flanking cards.

For those of you trying to transit from the Petit Lenormand to the Grand Jeu Lenormand:

. This particular oracle is a spinoff from the Grand Jeu, but cross-referenced with the symbology found in the Petit Lenormand. As such, it is called the Petit Jeu Lenormand.

For example, here is the 10 of Diamonds which is also known as card #26 (the book) in the Petit Jeu Lenormand: 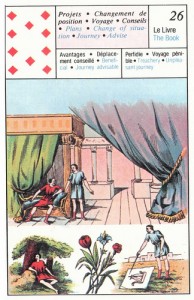 The Book traditionally means that there are secrets to learn. Possibly secret motivations. In the main picture we see Jason confronting King Pelias.

Now, what you need to understand is the story behind that particular scene, which comes out of the Argonauts (better known as the Quest for the Golden Fleece).

At the beginning of the story we are told that King Aeson (Jason’s father) stepped down (forcibly or not — depends on the version you read) when Jason was an infant. Consequently, Pelias was allowed to rule unopposed for several years (either as an usurper or as a regent depending on the story) until Jason comes of age… Until Jason comes of age, Pelias is king in all but name and is legally next in line for the throne should Jason meet an untimely end.

Over the years, Pelias has time to prepare and consolidate his power, so when Jason does come of age he is ready.

When Jason finally confronts his uncle (the scene we’re discussing), Pelias pretends to be willing to yield and give him the throne, but somehow manages to persuade Jason to go on a quest for the Golden Fleece in order to prove himself worthy of the crown. Jason, obviously too naive to realize that the throne is already his to take, starts to plan for the journey ahead of him. To Pelias’ esteemed pleasure, the quest for the Golden Fleece begins. He has masterfully manipulated Jason and is rid of the only person standing in his way.

To me, the above explains that there are probably hidden motives that you need to look out for in a certain situation. Someone is out to get the better of you and send you off on a wild goose chase. So ultimately: “Choose your council wisely, and make sure that their interests don’t lie counter to your own.”

Shop around for your own Grand Jeu Lenormand