Would you like to make a deck that Mlle Lenormand herself might have used? If so, excellent!! What follows is how to make your own Petit Etteilla deck, Mlle Lenormand’s very first divination deck!

Those that have looked into Mlle Lenormand’s life and read her books agree that she probably did not invent the Oracle cards that now bear her name. As a curious student of her arts, I will keep searching for answers, but one thing that has influenced her is another French Cartomancer that was also in Paris before the Revolution. Jean-Baptiste Alliette (1738 – 1791) — Also known as Etteilla — published several books in which he described how to read ordinary playing cards as well as the Tarot. In her diaries, Mlle Lenormand is said to have bought Etteilla’s petit jeu and book as her first divination deck.

It goes without saying that I have investigated this lead with a great deal of personal curiosity.

Curious, I set out to recreate such an oracle deck myself and here I show you how to do the same.

The first thing you should do is find an old deck of cards that you don’t mind writing on, preferably in cardboard because it’s easier to write on those, but if you have a good permanent marker, I don’t see why you wouldn’t be able to use a plastic based card for your deck.

Next: verify that you have all the cards from the Aces, Kings, etc, all the way down to the sevens. You’ll also need a Joker which you should keep for later.

Now: get rid of all the sixes, fives, fours, threes, and twos. (See table at the end of this post if this is confusing).

The next step is putting all the cards in their reversed position:

In some cases it’s easy to determine if the card is reversed or not. For example, I went by the drawings on the back of the cards to help me… You can do the same, but if you’re stuck with a deck that doesn’t have an obvious reversed picture, you’ll have to resort to looking at the cards themselves to see if the card has more upright hearts, spades or clubs. For those diamonds lacking any drawing that could point to a reversed card, look at the back of the card to see if there is a drawing, otherwise, just pick a side.

Once all the cards are reversed, put an R (for reversed) on each of them in the upper left-hand corner. NOTE: the Joker is the only card that you don’t do this to! The Joker is never read with a reversed meaning since the joker represents the person you are reading for.

Below is an example of how the cards should look like once you’re done. On the left is how it will look reversed, and on the right how the same card would look like upright.

Once you have the cards marked as reversed, you are now ready to give each card a numerical value.

Below is a table of the cards’ two upright definitions with their two reversed positions. So, taking the 8 of diamonds as an example:

To give you an example of how things should look when you are done: on the left how the same card would look like upright, and on the right is how it will look reversed.

This is the table of meanings Etteilla gives in his book for the Petit Etteilla. I’ve translated them into English to make it easier for you to understand everything. 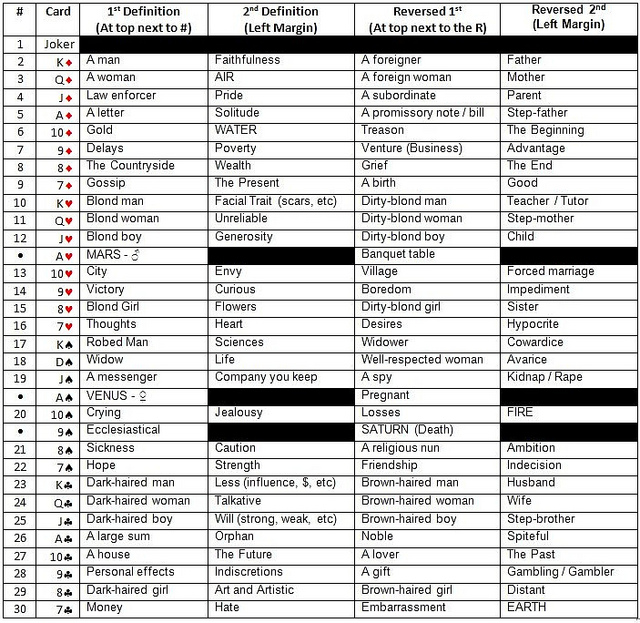 Note: There has been some confusion about the King of Spades 1st definition meaning “Robed Man.” This is a concept in French referring to professionals who wear robes, such as judges, college professors, and the like.

Now that I’m done with mine, I have to go and practice! Once I have, I will let you know how to go about making some readings… but first, I need to make sure that I have understood them and that I can actually apply them to something!!